In the past, I made an app that used RStudio's Shiny platform to plot network graphs with RGraphviz. This worked, and gave some nice results, but when I found out about cytoscape.js, I really wanted to try that out.

The app is designed to plot tumblr reblogs, so it has a tree structure, but simply plotting things as a tree is not very space efficient (as in, the visualization takes up too much space). Therefore, using different types of layouts can really help.

In my first app with graphviz https://colindiesh.shinyapps.io/tumblrgraph, there are several built-in graph layouts including "neato" "twopi", "circo", and "dot"

I made all of these available for users to try in the Shiny app. The names of the layouts don't lend much to their behavior, but they are built-in functions in Graphviz. There are both "tree" and "force-directed" style graph views. As I mentioned, the "tree" style view make a lot of sense for the tumblr reblogs, but the force directed graphs are also a lot more compact, so offering both styles is useful. 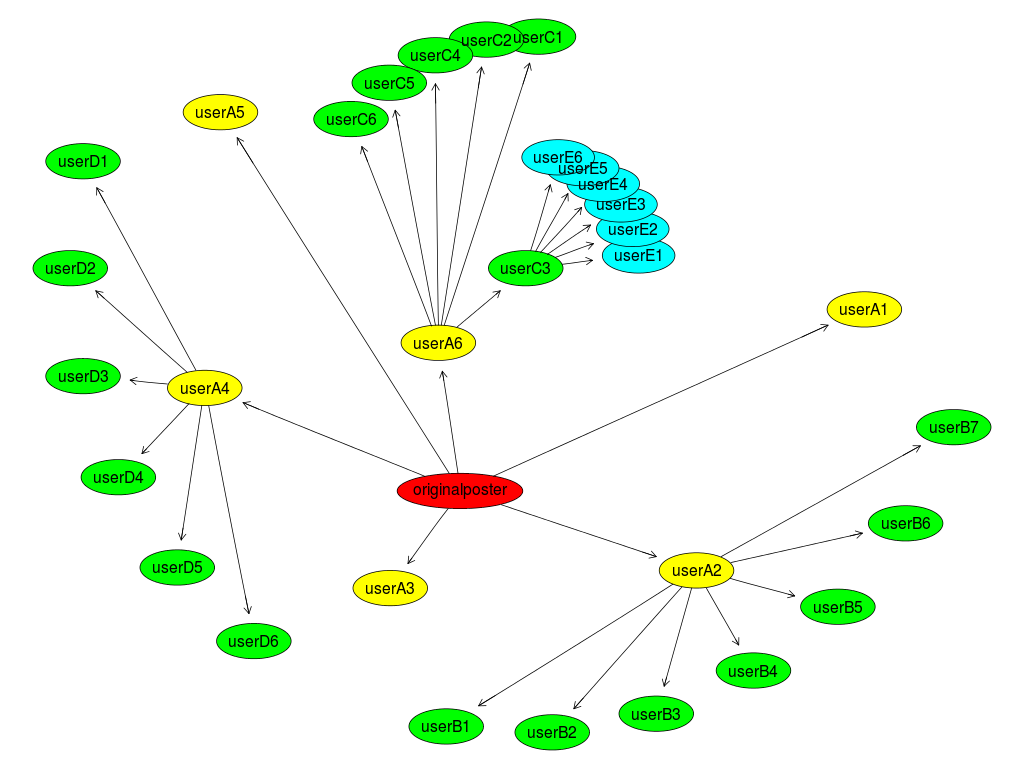 I wanted to replicate all the features that I had in the Graphviz app in Cytoscape.js. Here is the breakdown of the basic components that needed replicating:

As I went along, I was happy to learn that the concepts mapped very easily to javascript and cytoscape.js. The implementations are a little different, but it worked out very nicely. 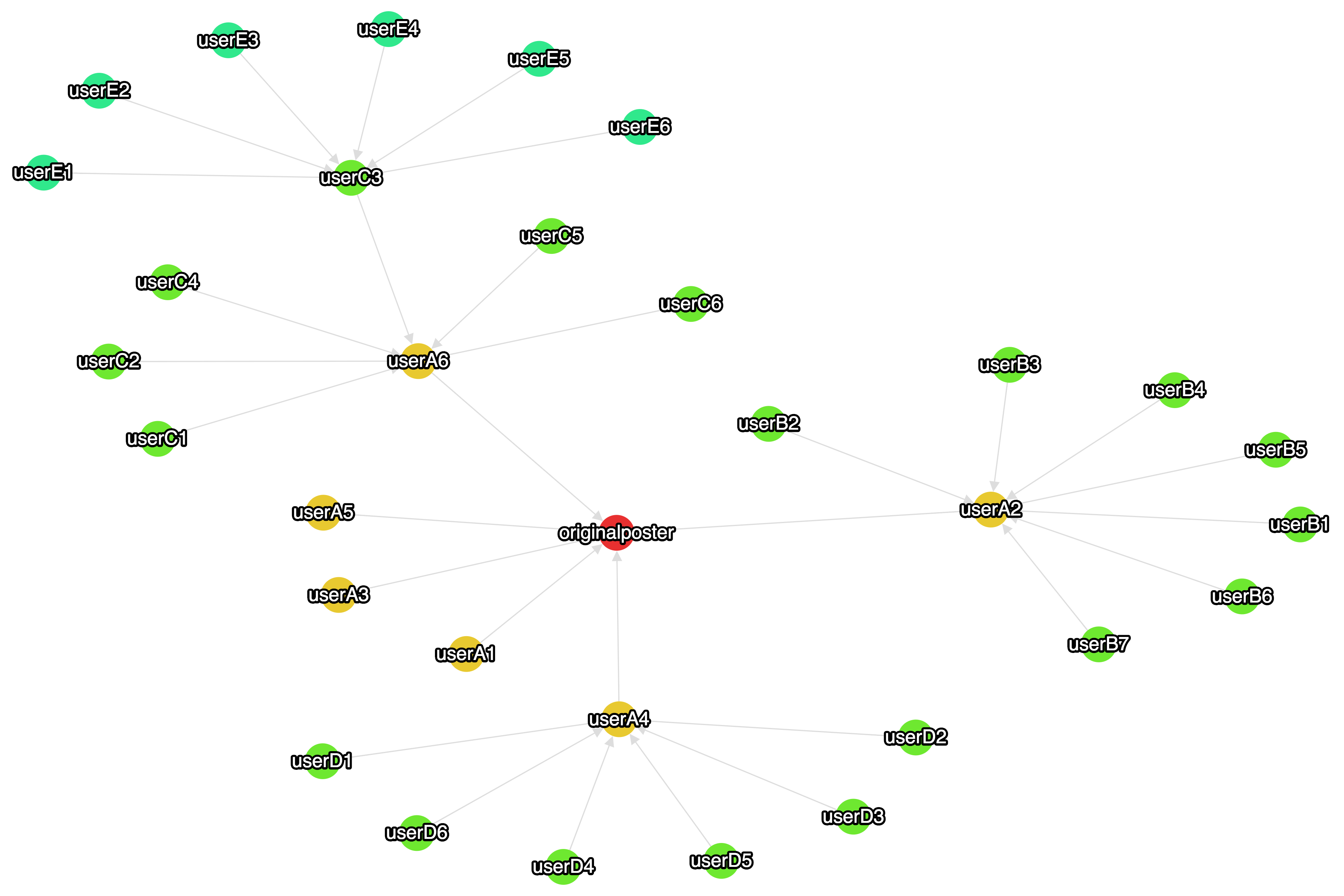 Figure 2. Same data plotted in Cytoscape.js with the springy layout.

In the new app, we enabled several different layouts similar to the Graphviz app too. In cytoscape.js, the layouts that are offered include "arbor", "springy", "cola", "cose", and "dagre". I like "cola" because it really looks like bubbles moving around in a soda. Others are worth experimenting with too. 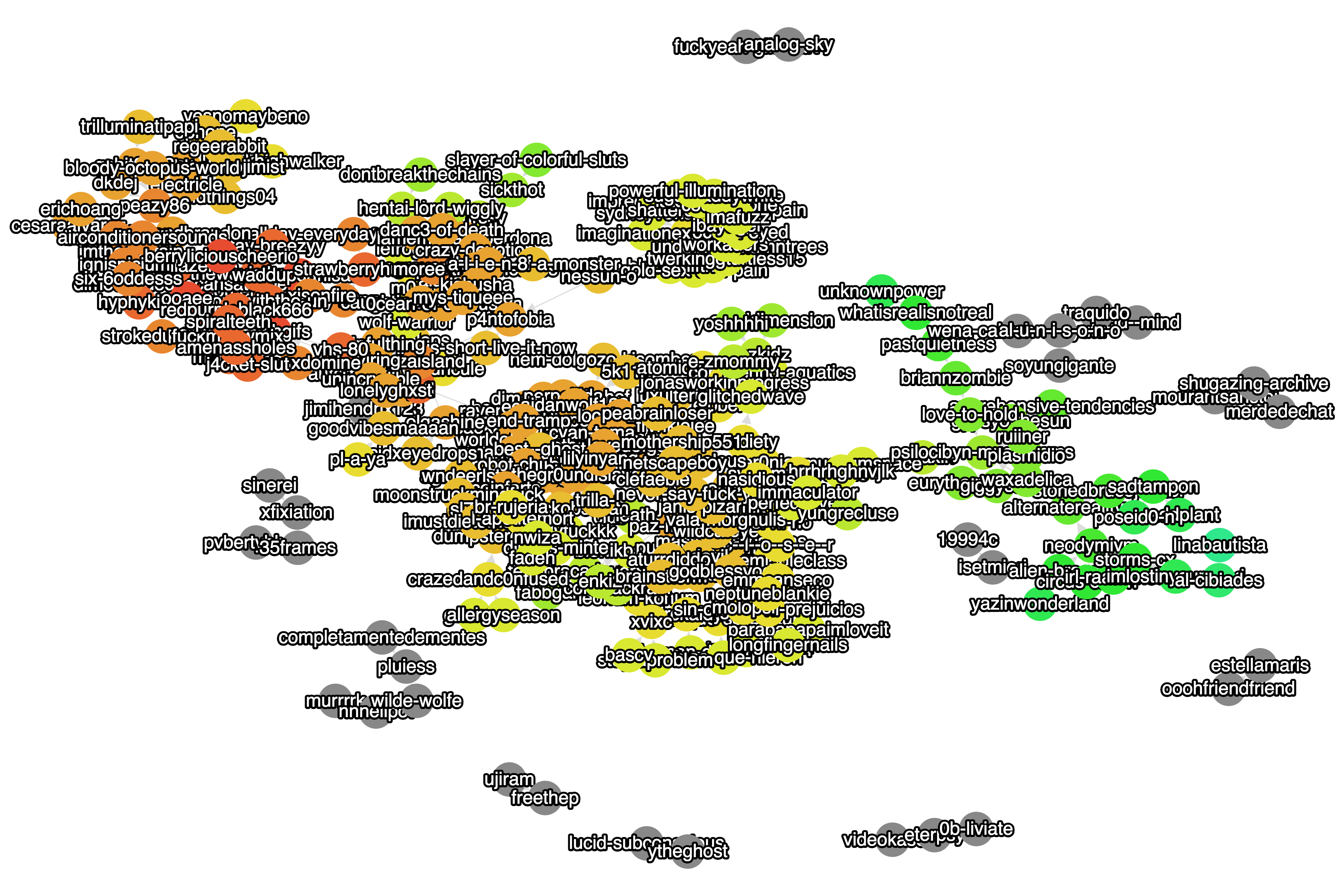 The new cytoscape.js app also has a nice animation feature. The old graphviz app offered animation too (using Yihui's animation library for R) but the new version can automatically encode HTML5 video on the client side from individual picture frames in the browser using "Whammy"! This quite impressive!

So to animate the graph, what is done is

This strategy for the animation is actually better than the original graphviz version that I had because the layout is only done once, which is time saving and it is also more consistent (the layout changes a lot if you re run it on different sets of nodes).

Check out the app here http://cmdcolin.github.io/tumblrgraph2/

Check out an example of the HTML5 video here