I have started endeavoring to learn Rust. I did the rustlings exercises but I knew the concepts would fade rapidly from my brain without some practice. I have now started making a music player using Rust+GTK4.

I chose GTK4 to have a linux native GUI music player. Particularly, I have a particular foobar2000 setup that I wanted to emulate. I have used foobar2000 under wine (windows emulator on linux) and it's not terrible, but it has background CPU consumption of about 15% idle and doesn't feel quite right sometimes. I have used a variety of other linux music players such as quodlibet (GUI/GTK based) and cmus (command line) but they didn't really feel quite right.

I started by attempting with Relm4, which I may return to at some point, but trying to juggle learning Relm4-style widgets, GTK, and rust all at once was a bit much. I stepped to using gtk4-rs directly.

#Create a "spreadsheet style" data grid of tracks with ColumnView

Then, I wanted to create a data grid showing to display e.g. a table with artist, track, album, etc. I chose to use the GTK ColumnView to drive this. I stumbled around looking for example code, but there was none specifically for the ColumnView. I also realized the ListView example from the gtk4-rs examples with it's factory function had similar needs that the ColumnView.

I found out that I basically needed to create a ListStore. I thought if I could make my own GObject subclass, it would solve everything, but I had trouble getting making this work (rust doesn't have the concept of extending a class for one thing, you implement various traits instead). Finally, I randomly stumbled on this link using a BoxedAnyObject with a good example of storing data in a ListStore https://gtk-rs.org/gtk-rs-core/git/docs/glib/struct.BoxedAnyObject.html

The BoxedAnyObject is a GObject, so this was an good route to storing the ListView items. There was no example code for connecting the ListStore with the ColumnView, so I stuggled for awhile before realizing that the ListView example in the gtk4-rs codebase has similar concepts.

See [1] for minimal usage of ColumnView that I contributed to the gtk4-rs repo!

To actually play audio, I looked at a couple options. There was even one option called GTK MediaFile which should to be able to play e.g. mp3s, making my job of making a media player much simpler, but it produced an error "GTK could not find a media module. Check your installation." which had very few references on the internet. I figured this could be difficult to solve or point to issues I could face later on making minimal executables for users.

So, next I tried out symphonia (https://github.com/pdeljanov/Symphonia/). Symphonia requires a lot more code to work (~1000 lines so far, copying from the symphonia-play example) but it has broad file format support, pure-rust audio stack, etc. I got confused about how to package it into an easy-to-use system though, having to create a symphonia player on a separate thread, so I looked elsewhere...

Next I turned to rodio. This works well, and automatically plays on a separate thread, but I found two issues 1) I have to initialize the rodio player in "fn main" and not anywhere else, or it would just play a short blip of audio (https://github.com/RustAudio/rodio/issues/381). Then, it turned out that the rodio Sink instance (which you pass audio to) cannot stop and then play new song xref (https://github.com/RustAudio/rodio/issues/315). To workaround, I replace it with a new Sink.

This required me to learn about RefCell. I googled probably about 50 things just grasping at straws for awhile, but then landed on the solution of putting the Sink in a Rc<RefCell<Sink>>, then that allows me to pass it into my callback that handles double clicking the songs in the ColumnView, and then I borrow the RefCell mutably to replace it with a new Sink.

I also wanted to have the option of reading and writing audio metadata. Symphonia only reads metadata, so I found the lofty crate.

I also realized that reading tens of thousands of file's metadata at each app startup would be slow, so I endeavored to store that data in an sqlite database. I found that music players like foobar2000 and 0xdeadbeef have databases of track metadata also (Example folder on foobar2000 (1.x) for this snap/foobar2000/433/foobar2000/profile/library/74E45640B1C695CC/meta-0001, meta-0002, etc.)

I used the walkdir crate to walk a directory for files, lofty to read the metadata, and then finally inserted the data into the sqlite db. I am still working out the schema for the database but it provisionally associates data with a primary key of filename.

Originally I queried the sqlite database and stored a Vec<Track>, where Track is a struct with artist, album, song title, etc. I realized that this causes issues passing this around to different functions, and storing them in the BoxedAnyObject, (example thread discussing issue https://stackoverflow.com/questions/42954008/how-to-pass-one-vec-to-multiple-functions-in-rust) so I changed functions to accept slices of the Vec, and to make it a Vec<Rc<Track>> instead of just Vec<Track> (another related thread https://users.rust-lang.org/t/self-has-an-anonymous-lifetime-but-it-needs-to-satisfy-a-static-lifetime-requirement/58641/3).

The current work is at https://github.com/cmdcolin/fml9000 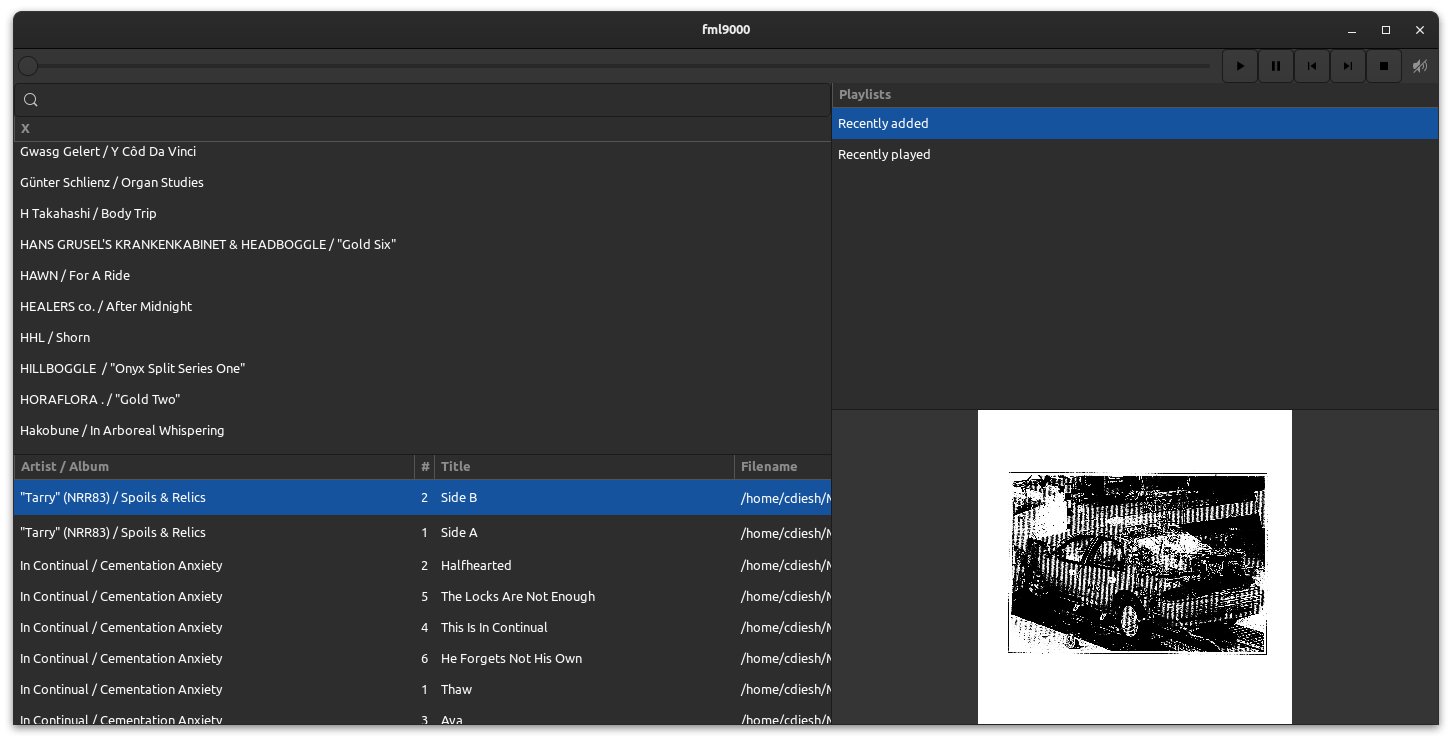 Screenshot shows the current look and feel. Some stuff in the screenshot is mocked and not fully functional, but it has been a great learning experience thus far

#Footnote 1: Creating a PR to the gtk4-rs repo to demonstrate example ColumnView usage

I created a PR (https://github.com/gtk-rs/gtk4-rs/pull/1111) to demonstrate simple ColumnView usage. The code review that was given on the PR was excellent. They explained how to simplify the code I submitted so that each grid cell was very minimal (starting from a gtk::Box with a gtk::Label inside of it, to just being a gtk::Inscription which is very fast). Big thanks to the team for helping out with this!

After this hurdle was crossed, I felt much more comfortable in the GTK mindset, and I quickly fleshed out some more UI for the app